It is our grand plan to get to the below topics and more, maybe even some mail, on this program. Check back for updates.

The meeting started very late. There was a lot of wrangling about the agenda. The Chair insisted on imposing details on the agenda that the LSB had not agreed to. The General Manager reported some figures that I had to ask about. Did WBAI really raise a tally of about $92,000 over the last three days of the Spring 'thon? Really?

The Summer Solstice, for the Northern Hemisphere, is tomorrow! That's on Sunday, June 21, 2015 at 12:38 PM (ET). I am basking in the abundant, bright light already. For more on the seasons and sub-seasons look here.

The annual Christopher Street Liberation Day March will occur on Sunday, June 28. I plan to be there. Here's the Web site about it.

Neither the official WBAI Web site, nor the official Pacifica Web site have links to it that I can find, but here's a link to the only Web pages that say anything concrete about the currently ongoing Pacifica elections. 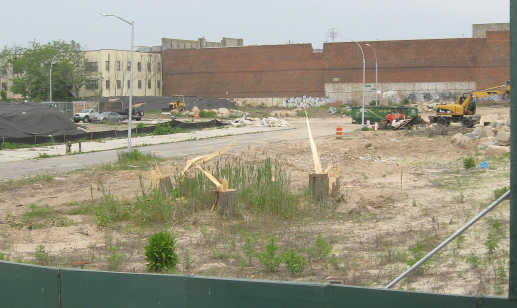 The Stumps of the Quaking Aspens Are in the Foreground

On a recent sojourn to coney Island we found that the quaking aspen trees that had been adjacent to the Boardwalk for decades had been cut down for this project to make some sort of indoor/outdoor location for events. Sad to see the trees go. When they were in leaf, and there was a breeze, you could hear them making a characteristic sound.

It looks like Highland View Avenue, the little street that's still visible in this photograph, will be gone pretty soon too.

It's sad to see things getting destroyed like this. Highland View Avenue and the quaking aspens were quaint things, but they brought no one a profit, I suppose. 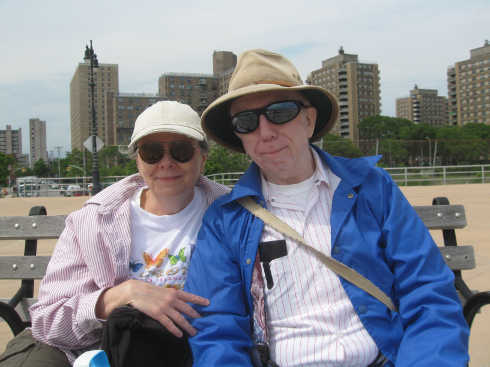 Pickles of the North and R. Paul Doing a Selfie

We used a monopod to take this selfie. Maybe we should experiment with more of this sort of thing.