This is our annual Christopher Street Liberation Day program! It's also known as our Pride Program. We plan to talk about the march, and some ancient history, along with various other topics on this program. Check back for updates.

The meeting started very late. There was a lot of wrangling about the agenda. The Chair insisted on imposing details on the agenda that the LSB had not agreed to. The General Manager reported some figures that I had to ask about. Did WBAI really raise a tally of about $92,000 over the last three days of the Spring 'thon? Really? 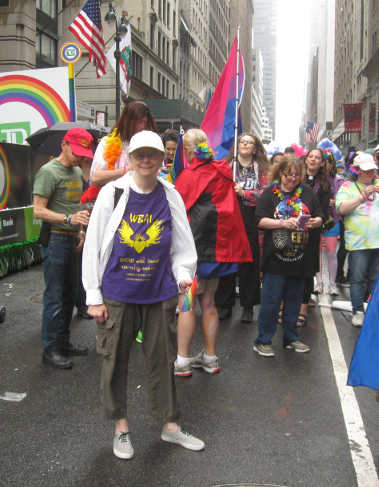 Pickles of the North Before the March Started

We plan to talk about the Christopher Street Liberation Day March that was held on June 28, 2015. Oh, there was a lot of stress caused by what was posted to the Heritage of Pride Web site about the march. I only noticed it all the night before.

Here you can see Pickles of the North, wearing her WBAI T-Shirt as designed by our own Uncle Sidney Smith. When I say that this is where people lined up before the march, you can see that the words “lined up” are taken with a pretty loose meaning.

It had rained heavily the night before, and for part of the morning before the march. We had a mist that went from light to heavy, and then to a drizzle just before we stepped off from our E. 40th St. lineup area. We think that this meant for fewer attendees than usual.

An Imperial Storm Trooper Was There

Yes, anyone can be gay, lesbian, bisexual or transgendered, even an Imperial Storm Trooper. This march watcher would probably win the award for the person who traveled the farthest to get to the march. I doubt if anyone else came from a galaxy far, far away.

This Servant of the Emperor didn't let a little rain before the march, and some drizzle during it, stop him!

In some places on Earth, however, things were not so good. In Seattle, WA some gang of creeps went around purposely attacking gay people, leaving two gay men beaten bloody. In Istanbul, formerly Constantinople, Turkish police attacked the peaceful crowd gathered at Taksim Sq. and used rubber bullets and tear gas to disperse the crowd. The people in charge of Turkey are clearly not enlightened folks. 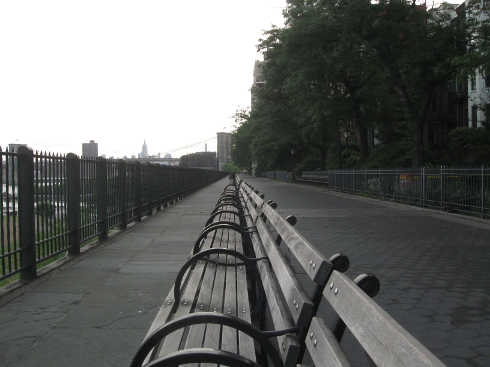 The Brooklyn Heights Promenade After Our Last Program

After the last program Pickles of the North and I went to the Brooklyn Heights Promenade for the first time in quite a while. It's pretty easy to get to from WBAI's current location.

Pickles was tired, and was taking a little nap next to me as we sat on the bench from which I took this photograph.

While I was busy taking photographs and scribbling away, as I tend to do, a young woman came walking up to us, said, “Good morning,” and then started talking about the murders in Charleston, South Carolina. Pretty quickly she started pitching something. Turned out that she was a Jehovah's Witness. And she woke Pickles up with her talk and started trying to palm off some Jehovah's Witness brochures on the half asleep Pickles. Pickles woke up enough to refuse the silly, superstitious stuff, and the woman left, but poor Pickles was not pleased to have been roused from her little nap.

Maybe the next timer we go there we won't be bothered by people pushing their superstition on us. We can only hope.