Yeah, it's a pitching program. We only have to pitch this one time during the 2015, Summer 'thon. Of we are on the air in two weeks that will not be a pitching program. These Summer 'thons are shorter than the regular ones. And the station does need the money. So we are hoping that listeners will call in a pledge and help support this radio program and WBAI. We plan to get to the below topics and more on this program; of course with a pitching program you never know what's going to happen. Check for updates, I might actually post some.

The meeting started extremely late. There was wrangling about the agenda. Anticipating that we'd eventually get a quorum we had public comment, which all LSB meetings are required to have. Everyone agreed that we'd count that as the public comment period for the meeting. After the meeting started the FoBs insisted that we had to have public comment during the meeting, making believe that they had not explicitly agreed only half an hour earlier that we'd had it already. What the FoBs were doing was trying to prevent the meeting from getting anywhere. They do this a lot. We passed a motion about a Program Director search, the station hasn't had a real Program Director since March 1999, when Samori Marksman died. 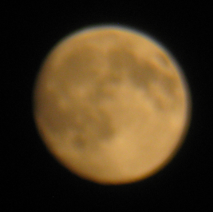 Tonight we have a Blue Moon for our program. This is the second full Moon of July, of course it's August now, but it's the same Full Moon, and that makes it a Blue Moon. We had the first Full Moon on July 2, and the second arrived on July 31.

Will this affect the program, or are we just going to be pitching lunatics no matter what phase our big satellite is in?

The WBAI Summer 2015, 'thon has begun. Management will be looking to see what programs give evidence of having listeners. I hope we raise some money for the station this time.

So for this WBAI Summer 'thon, if you can, please call 1-212-209-2950 during the radio program and pledge some amount of money to help keep Back of the Book on WBAI and help keep WBAI on the air.

We plan to talk about various things on this radio program, including some anti-gay attacks this past fortnight. We do have to pitch, however, and there is no telling exactly what we'll get to on the air.For a pitching program it's better not to promise too much, because we might have to sacrifice some content for time spent pitching. The station really needs the dough. 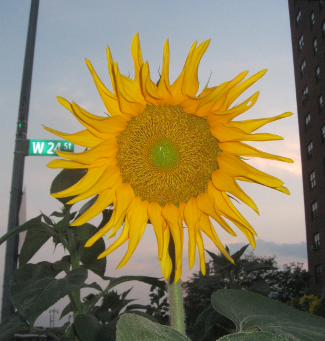 A Coney Island Sunflower at the End of Day

Yeah, another flower photograph. This is one of the sunflowers that are growing just off the Boardwalk at Coney Island. From the street sign in back you can tell exactly where this one is, too.

We've gotten some interesting photographs of the sunflowers that grow in some of these dead end areas in Coney Island. This one is illuminated from front and back. I used a flash and the Sun is around the corner in back of it.