Autumn in New York! We'll be doing some of that, wishing someong a merry birthday, and all sorts of stuff, including talking about what idiots are teaching in Texas high schools.

So this 14 year old kid brings his science project to school, and it's a digital clock. His amazingly stupid teacher and Principal at MacArthur High School in Irving, Texas call the cops because they think it's a bomb! One equally stupid cop, among the five who showed up in response to their call, looked at the kid and said, “Yup. That's who I thought it was,” even though he'd never seen the kid before. I suppose that it helped these yokels to leap to their decision that the kid's name is Ahmed Mohamed.

The kid was placed under arrest and taken away from the school in handcuffs. He was also suspended from schol for a number of days. It didn't take long before the cops were forced to let the kid go, but the suspension remained in effect. Ahmed Mohamed has since changed schools.

As a result of this publicity President Obama invited the kid to the White House, and others have praised him. This did not sit well with two other idiots of note, Bristol Palin and her mother former Republican Vice Presidential candidate Sarah Palin. They accused the president of fanning flames of racial division. Yeah, we knew that other stupid people would react like that. 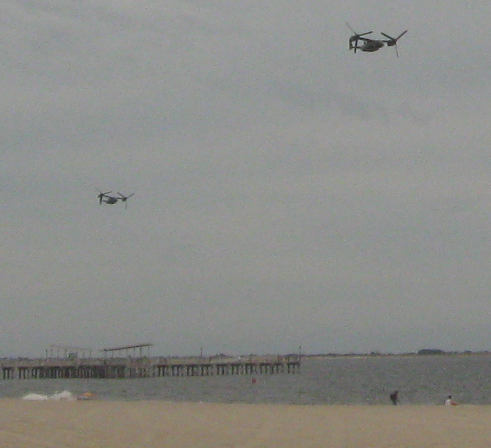 A Pair of V22-Ospreys Over coney Island Beach

Hey, Pickles of the North and I were at Coney Island this past week and we saw someting interesting there. We saw three V-22 Osprey aircraft escorting two helicopters with “United States of America” emblazoned on their sides. Pickles and I figured it was either a preparation for getting the Pope from JFK to Manhattan later in the week, or an exercise related to moving the President of the United States along the same route.

They came by, or over, us in two flights. I did a video of one of those. I'll post here it as soon as I can figure out how to edit it.

The “Tribute in Light” From Atlantic Ave.

Our previous program was in the wee hours of September 12th, so the “Tribute in Light” was still on from the previous evening. Here's a shot of the lights from in front of WBAI's current headquarters at 388 Atlantic Ave.