A kind of theme has cropped up for this radio program. It was unintentional, but it's there. We are going to talk about things that happened 100 years ago, and about wars. It's a pitching program, so we just can't predict what the hell is going to happen. I will maybe get into some personal stuff on this program. Well, that can be something you don't hear everywhere else. And maybe you could see your way to pledging during this program. Maybe I'll update this Web page some day.

Remembrance of All Wars

Without my having planned it we seem to be talking about wars a lot on this program.

Certainly 100 years ago World War I was raging. We plan to talk about some things from 100 years ago, including things not related to wars, on this program.

On Tuesday I will have been home from the Republic of Viet Nam for 46 years. Fittingly, I plan to talk about PTSD on this program. We'll see how that goes. 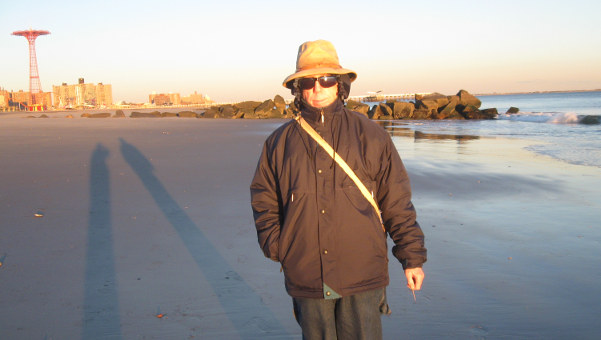 Oh, What A Fashion Plate!

The “Season” at Coney Island has closed, but in recent years various parts of the place have stayed open past the traditional season to do business for Halloween. Pickles of the North and I went to Coney Island the day before Halloween and it was not all that warm. Here I am with my hat on over my jacket's hood. The Shadow of my photographer, Pickles of the North, can be seen stretching toward the Parachute Jump.

I had just had my blood tests a little earlier that day, and I was glad to be able to go a little off my diet and have a hot dog or two along with maybe a tiny number of french fries. Oh, but going off the diet didn't last long.

I doubt that we'll have time to talk about our latest Coney Island excursion on this program. Too bad. Maybe I'll put more about it up on this Web site.

Our very own Uncle Sidney Smith, whose program Saturday Morning With the Radio On used to alternate with us before Berthold Reimers banned him from the station and still won't tell him why, has a blog these days. You can reach his blog here. Uncle Sidney also has his own Web site where he posts all sorts of things, including his podcasts.