It's Saturday morning, May 7, 2016, 02:31, and I have updated this Web page with the promised links to the Tor browser and the Gnu Privacy Guard Web sites. I've updated the part about reading the mail, since we did that on this program. More to come. The original top of this page follows the arrow. ⇒ It's another big rush to get out of here. Slim Web page this time, but I'll flesh it out. I have also updated the last two programs' Web pages. I'll update this one pretty soon too, I think.

The official audio archive for the previous radio program, on April 9, 2016, was severely compromised. The audio was too low to be easily heard, it's at about -46dB, for those of you who are familiar with these things. I have constructed an archive from my own air check. I have boosted the audio up to where you can hear it and I've done some noise reduction to take out the hum that accompanied the program. So click on this link and you'll be brought to a Web page where you can listen to this program.

It has come out over the past fortnight that the Royal Canadian Mounted Police have had a back door to all BlackBerry devices for years! We plan to talk about this development, and of course it also relates to the FBI v. Apple and other encryption controversies that we've been following on this program.

To pile on the security/privacy problems people have, it has come out that Signalling System No. 7 (SS7), which is used for most of the world's mobile phones to set up phone calls, get numbers dialed and other functions of the ubiquitous mobile devices, has a big vulnerability in it. If someone knows how to exploit the flaw in SS7 they can listen to, and record, all of your phone call, track your whereabouts, even if you have GPS turned off on your phone, or if you have no GPS function on your phone. They can also access all of the data on your smartphone.

What crucial piece of information do they need in order to accomplish this total take over of your mobile device? The phone number of the device. On 60 Minutes last weekend they had a guy from Germany who took over a mobile phone of a congressman and do all of this stuff. It wasn't the congressman's regular phone, 60 Minutes had given it to him for the purposes of demonstrating the extent of this vulnerability. So from Berlin, Germany this guy was able to snoop on the Congressman's phone activities in California, USA. Yeah, we'll talk about this on the program.

On this program I said I'd post some links to things that can help folks to maintain their privacy. Here are two things everyone should at least know about.

The Tor Browser allows you to avoid a lot of snooping. Developed by the United States government years ago it has metamorphosed into a a 501(c)3 not for profit enterprise that puts out the browser. You can get more information and download the browser here.

Something else everyone should at least know about is GPG, full name Gnu Privacy Guard. This software allows you to encrypt and/or sign files, E-mails and just about anything digital. Here is a link to the Gnu Privacy Guard Web site. There is a bit of a learning curve to GPG, but it's worth it, and you can get help in various places.

We did indeed get to reading some mail on this radio program. We're going to try to read some more on the next program as well, even though we'll be pitching then. 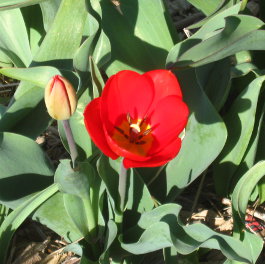 Yeah, it's mid-Spring and the flowers are blooming all over the place. I can't resist taking snapshots of the damned things. This one was down next to the Coney Island Boardwalk. And there's one right next to it ready to burst out into the big, wide world too.