All right, we're pitching again. Let's hope we can raise some money and keep everything going. We plan to get to the below topics and more on this program, and because it's a pitching program there really is no telling what might happen. I'll update this Web page, so be sure to check back in the future.

Even though those of us not in the so-called Justice & Unity Campaign haven't been attending LSB meetings due to the dispute about who's a member of the LSB and the denial of WBASI representation on the PNB I have put out more written Treasurer's Reports for all to read.

The WBAI Spring 2016, 'thon has begun. Management has already announced that they will be looking to see which programs give evidence of having listeners. I hope we raise some money for the station this time.

So for this WBAI Spring 'thon, if you can, please call 1-516-620-3602 during the radio program and pledge some amount of money to help keep Back of the Book on WBAI and help keep WBAI on the air. Remember, the pledge needs to come in while we're on the air for it to count.

We plan to talk about the Battle of Jutland on this program. It was the largest naval battle of World War I and it happened 100 years ago as of the end of this month. 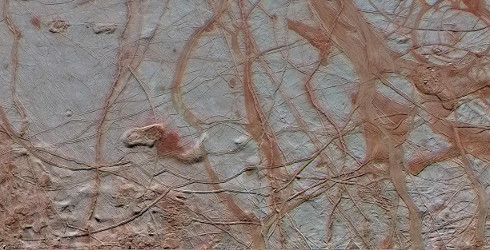 Above is an enhanced color photograph of a 350 by 750 kilometer area of the surface of Jupiter's moon Europa. This NASA photograph shows the contrasting colors on the surface of Europa. The light colored aras, gray on this image, are just ice. Those brownish areas may be some material that has welled up between cracks on the surface of the satellite. You can see the lines going every which way on the icy surface. It is thought that the cracks are formed by the satellite flexing as the pull of Jupiter's enormous gravity changes as the satellite travels closer to and then farther from the gas giant planet in the course of its elliptical orbit.

What makes some parts of the surface a different color from other parts? The is speculation that it could be the result of organic compounds evolving in the salt water ocean that is believed to lie beneath that icy surface. And if there are organic compounds in the roofed-over ocean could there also be life in there? NASA plans to launch a spacecraft to Europa in the next decade to see if they can learn more. 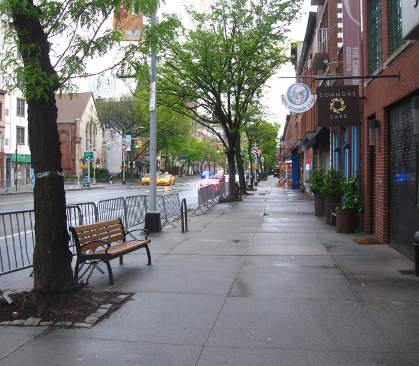 This is what it looked like in front of WBAI after the last program. There was a big bicycle race scheduled for later that day, and the police were there enforcing the “No Parking” rule for it. You can also see the French barriers set up to keep the crowds where the police wanted them. Rainy morning early in the Middle Third.

The Tor Browser allows you to avoid a lot of snooping. Developed by the United States government years ago it has metamorphosed into a a 501(c)3 not for profit enterprise that puts out the browser. You can get more information and download the browser here.

Something else everyone should at least know about is GPG, full name Gnu Privacy Guard. This software allows you to encrypt and/or sign files, E-mails and just about anything digital. Here is a link to the Gnu Privacy Guard Web site. There is a bit of a learning curve to GPG, but it's worth it, and you can get help in various places.