It's Wednesday afternoon, July 27, 2016, 16:24, and I've updated this Web page a little bit, mostly by adding my animation of a certain comical logo that came out right before the program. More to come, I hope. The original top of this page follows the arrow. ⇒ This has been one violent fortnight, and some things have been happening right before we go on the air. Well, our plans have been knocked about by various incidents, but we'll do a show. I hope we'll get some science stuff in, but we might not. No mail on this program, unfortunately. Tune in for updates.

There has been so much happening over the past fortnight. We plan to talk a bit about the various killings, and get on to other stuff.

On this program we talked about that jackass Trump finally announcing his Vice Presidential running mate. He picked Indiana Governor Mike Pence, who is an awful, right-wing fool. He is anti-gay and he is against women's right to choose. We are also seeing information that he doesn't believe in evolution through natural selection. He has certainly talked about some supernatural being creating everything.

Something that I think shows their ineptitude is their initial choice of the logo for their campaign. I have animated their original logo, just to preserve the point of it for prosperity. They immediately got s lot of well deserved ribbing over that tone deaf logo, so they ditched it for a different logo by the time we hit the air.

Here's hoping that these two idiots don't get to destroy America and the world any time soon. 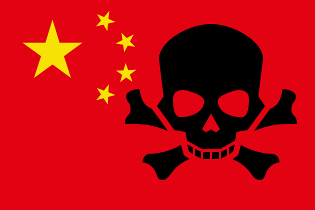 Some People Think They Own the West Pacifica Ocean

We plan to talk about China losing the court case at the World Court in the Hague this fortnight. The court ruled they they do not own a huge chunk of the international waters of the western Pacifica Ocean, including parts that are actually a part of the Philippines.