It's Saturday morning, April 1, 2017, 10:20, and I have updated this Web page with a tiny bit about our traditional welcoming of the Sun to the Northern Hemisphere. The original top of this page follows the arrow. ⇒ At least it shouldn't be as awfully cold getting to WBAI this time as it was two weeks ago. We plan to talk about the latest awful stuff with Trump and his pals. We also plan to talk about the great victory of their not getting rid of the Affordable Care Act. In addition I'll talk about some things from years ago, and Pickles of the North will talk about her latest trip up north. I'll try to update this Web page some time soon-ish.

The next WBAI LSB meeting is scheduled to be held on April 12, 2017, at a location to be announced.

We were very pleased to hear the announcement that Trump and his pals had been unable t get it together to destroy the Affordable Care Act. We'll be talking about that, all right.

We will again mention Robert Manning, who died in Viet Nam 48 years ago yesterday. He used to sit in the desk in front of me in high school. Above is a photograph of his name on the wall of the New York State Viet Nam Memorial in Manhattan. 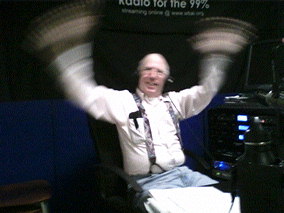 Back of the Book Welcomes Spring!

On a lighter vein, we also celebrated the arrival of spring with our traditional welcoming of Sol to the Northern Hemisphere by playing Here Comes the Sun by The Beatles. And here you can see a fast photograph of R. Paul dancing to the song, while seated. One day we will figure out how to get Pickles of the North's cell phone to take higher resolution photographs. For now, this is all we can offer. 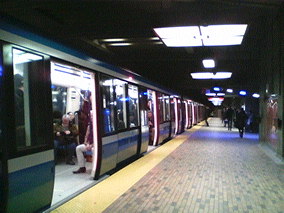 One of Those Single Car Subway Trains.

Pickles of the North went up north again this past fortnight. Among other things, she rode on one of those long subway cars that some people want to bring to New York city. She'll tell us all about it.