This has been one whipsaw of a fortnight.From no more assaults on the Affordable Care Act, to a renewed desire to kill it, from nerve gas attacks on civilians, again, to sudden retaliation with possibly no plan to back it up, to North Korean saber rattling. What two weeks these have been! We plan to talk about a bunch of the things that have happened during this fortnight, and about one thing that happened a hundred years ago. We'll get through as much as we can. Check back for updates.

The next WBAI LSB meeting is scheduled to be held on April 12, 2017, at Alwan for the Arts, 16 Beaver St. in lower Manhattan. The meeting is supposed to start at 7:15 PM.

We plan to talk a bit about the world of 100 years ago on this program. It was exactly a century ago this past thursday, april 6, that the United States declared war on the German Empire and thereby entered World War I.

A lot of why this happened is bound up in a miscalculation by those running the German Empire, including the infamous Kaiser Wilhelm II. Yeah, miscalculations of a bellicose nature in foreign affairs can have very large scale consequences. 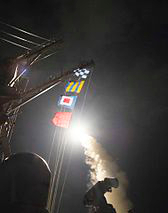 And then we have the events of April 6, 2017. Donnie Bonespur Trump ordered the United States Navy guided missile destroyers USS Ross and USS USS Porter to fire 60 Tomahawk missiles at the air base where the Syrian planes that bombed the civilians with Sarin nerve gas were based. He did give the Russians an hour of warning.

I wouldn't be at all bothered if this Bashar Assad creep got a bullet, or a guided missile, between his eyes. He's been bad news all along, and after he had his air force used Sarin gas on a village in order to terrorize the opposition, he really needs to be gotten rid of.

I am, however, concerned that we have this inexperienced, unqualified and unfit person as Commander in Chief who really looks like he is engaging in what I am calling cowboy foreign relations. It is not hard for a President to order a missile strike, but what comes next, how to deal with the consequences of the strikes and what else might be done, are much more difficult questions. 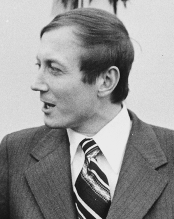 Russian poet Yevgeny Aleksandrovich Yevtushenko died this past fortnight. Oh, I read his big poetry book that was translated into English in the late '60s. Yeah, I remember old poets now and again. I'm not sure that we'll get to talk about him on the air on this program, but I wanted to acknowledge his passing at the age of 83 here on the program's Web page.