It's Earth Day 2017, and we'll be talking about that, and about the climate and about science under attack all over the place. We will try to get other things in too, if we can. Check back for updates.

The next WBAI LSB meeting is scheduled to be held on April 12, 2017, at Alwan for the Arts, 16 Beaver St. in lower Manhattan. The meeting is supposed to start at 7:15 PM.

We plan to talk about the Trumps misadministration's attempts to curtail science that it doesn't like. This includes NASA looking to determine what's happening with the climate. No surprise that when big business gets into government with the usual big business short sightedness that they'll not care about what will happen decades from now. But they also don't care about what's happening right now.

There are all sorts of disputes going on in Pacifica, which owns WBAI. The latest one has gotten the interim Executive Director to put out a press release about some people, including the Chair of the KPFA LSB, trying to break up Pacifica and grab what they can. 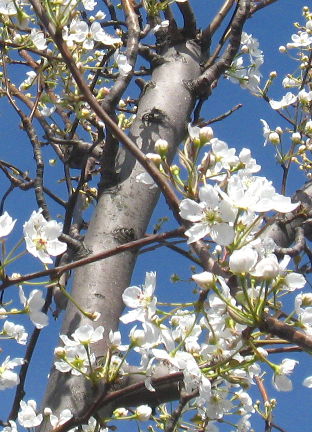 Oh, I keep on taking photographs of flowers in my old age. Here we have some flowers from a tree that is mostly considered a weed in its current location. You can get an entire copse growing in places between property lines or along the side of industrial sites or train tracks. In the Spring, however, these weeds can flower quite nicely. That's what we have here, something that is not even noticed for most of the year, but for a couple of weeks in the Spring it can make even a crummy place look nice.