We plan to get to the below topics and more on this program. We also want to get through some mail. We're having all sorts of problems keeping the computer going with weather related difficulties, so we'll see what we can do. This page will probably be updated pretty soon, so check back for those updates.

The next regular WBAI LSB meeting is scheduled to be held on Wednesday, July 11th, 2012, at Alwan-for-the-arts, 16 Beaver Street, 4th floor, in downtown Manhattan.

The WBAI LSB met on Wednesday, June 13th, 2012, at Alwan-for-the-arts, 16 Beaver Street, 4th floor, in downtown Manhattan. For the second time in two meetings I got to make a Treasurer's Report. I don't remember the last time I was able to do two Treasurer's Reports in a row. I delivered the by now not so great news that we're in pretty bad financial shape.

Tomorrow is the annual Christopher Street Liberation Day March! Most call it the Gay Pride march. Pickles and I will be there. Here's a link to some more information about it.

Just a heads up in advance. We will be pitching on our July 21st, program. We'll be pitching as a part of the WBAI Summer 'Thon. We'll be hoping to raise enough money for the station to survive until late in the fiscal year.

Web pages on this site updated since the last radio program: 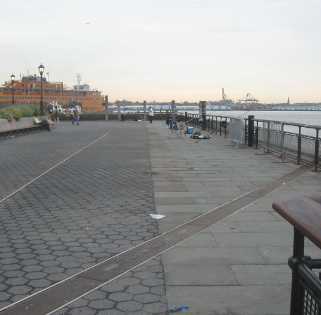 Battery Park Promenade to the East

So, as usual, we went to Battery Park after the last radio program. The people who go fishing there were taking up all the room on the railings, so we just paused to look around on the promenade for a short while.

And as we began to walk along I felt that something looked different. And then it hit me, The benches! Where were the benches on the promenade?

As you can see from the photographs there were none.

This was quite the surprise since the benches have been down there for more than a decade. As of this date we have not found out why the benches are gone. The promenade really looks different without them. It looks larger. Maybe that's why they were taken out. Still, I miss them. 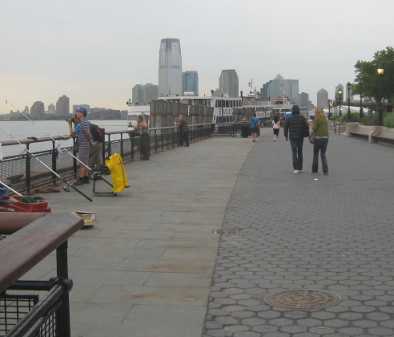 Battery Park Promenade to the West

Looking west on the promenade you can see that the benches that had been there have been removed too.

In both photographs you can see people fishing off the promenade. This doesn't seem like a great idea to me.

There are actual signs warning people not to eat any fish they may catch off Battery park. At least there used to be such signs. I think they may no longer be there. Whether they're gone because the waters of Upper New York Bay are so much cleaner than they had been or whether the signs just got taken down for image purposes, I do not know.

I do know that I wouldn't eat anything caught there.

I'll keep looking around for information about why the benches were removed.