We'll be pitching on this program, and we'll also be telling you about what really was happening on the last program. R. Paul was not just having a minor stomach problem. We will try to get in as much radio program as possible in between the pitches. We do hope that some of you will pledge during this program. Check back for updates.

The WBAI LSB meeting set for Wednesday, May 13, 2015, did not achieve quorum, and so was cancelled.

The WBAI Spring 2015, 'thon has begun. Management will be looking to see what programs give evidence of having listeners. I hope we raise some money for the station this time. 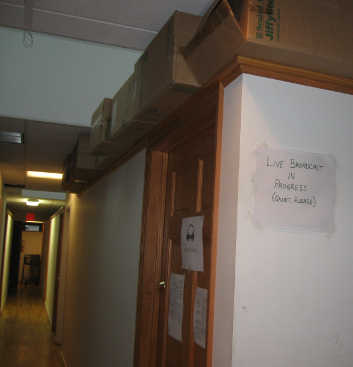 The previous program was our first one from the new Master Control studio at WBAI's current headquarters at 388 Atlantic Ave.

Here's a photograph of the studio from the outside. It's as impressive on the inside as it appears on the outside. Two of the walls do not go up to the ceiling, so that gap is filled in with boxes of envelopes that are used to ship premiums. They don't cover the entire gap between the walls and the ceiling because there's an air vent in the middle of one wall that can't be blocked.

I am told that this sign has not been so effective for producers who are doing live radio programs when the facility is more populated than it usually is when we're there.

I will take some more photographs and give a little virtual tour of the new Master Control at WBAI. I'll try to do that soon.

We plan to talk about what happened during the last radio program we did two weeks ago. It was not gas that had R. Paul feeling poorly.