This is the 30th anniversary program! It is truly amazing that we've gotten to this milestone. We'll talk about that a bit on this program. Meanwhile, we're lucky we're getting a Web page posted at all for this program. Tales of technological woe told below. But we have managed to get this Web page done, and we have every reason to believe that we'll actually be on the air this time, as opposed to the previous program, when we just broadcast to the stream and the archives. Check back for updates.

This is the 30th Anniversary Program of Back of the Book!

We plan to talk about the travails and triumphs of this radio program over the past three decades. We'll have two small clips to air. Oh. we'll try not to get into trouble while we talk about the program. 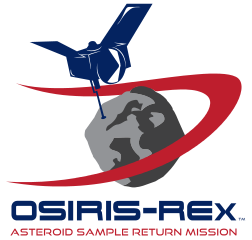 OSIRIS-REx is on Its Way to Bennu

NASA was able to successfully launch the OSIRIS-REx probe atop an Atlas V rocket last night. OSIRIS-REx, which stands for Origins, Spectral Interpretation, Resource Identification, Security, Regolith Explorer, will be going to the asteroid Bennu where it will pick up a sample of the asteroid and bring it back to Earth for further study. This is a type of mission that's been talked about for years. In about seven years we can expect to see if returning, and after that there may be some major announcements about the returned sample.

From Thursday night I couldn't get my computer to boot up. I figured that it might be my video card. Turned out I was right. I took a long time installing a new video card on Friday. And then I couldn't get the resolution set. The manufacturers anticipate only that people would upgrade a video card, and thus be able to removed the previous card's drivers. I suppose they just never thought that someone would use a video card until it failed and then wouldn't be able to so easily remove the old driver, as happened to me. And after I got all of that done, and had gotten my pre-program blurb done with the graphic for this program, I couldn't get it uploaded to either wbai.org of Twitter. It looks like both my modem and router have died together!

I've jury rigged an old modem, for which Verizon clipped me $40 many years ago, so that I can get stuff on-line. It's been a difficult day.

This weekend I'm going to have to try and get all of these hardware issues straightened out.

In case you're wondering why you didn't hear us on the air for our August 27, 2016, program, here's the explanation for that. 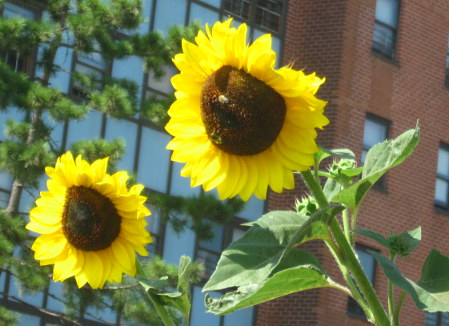 Yeah, another flower photograph. These were blooming down by the Boardwalk at Coney Island. The sunflowers are frequently seen in the little patches of earth to be found at the south ends of streets that terminate at the Boardwalk. Some of them are pretty damned big.

Pickles of the North and I have debated for years where these sunflowers have been planted there, or if they were initially seeded by someone who carelessly spilled some sunflower seeds in soil that we good enough. All you'd need would be one plant making it to maturity and it would spread seeds, and later sunflower plants, through every patch of earth that could support the plants.

The one on the right in the photograph has some bees on it. Bumble bees seems to be especially partial to sunflowers.